With eight weeks remaining in our 2019 fiscal campaign year, we are $9 million from achieving our annual goal. We can do it!  Nationally, there are nearly 1,000 donors who gave $1,000 or more in the previous two campaign years that have not yet made their 2019 gift. So, there is work to be done.  Our annual Summer Blitz program is the vehicle to help us close these outstanding gifts.  Read more below.

Our Summer Blitz program is underway which is our final quarterly campaign effort for this fiscal year.  Summer Blitz is designed is designed for lay leaders to raise funds by soliciting NEW gifts and closing gifts of donors who have not yet made their donation to this year’s campaign. Lay leaders (Makor and National Campaign Cabinet) have been assigned to communities for one or two days for 1:1 meetings, parlor meetings, and other fundraising opportunities that are organized by our local professionals. Local lay leadership support is critical in setting up productive meetings. This is also a wonderful time to follow up with prospects who have attended JNF events or who have recently travelled to Israel. Make introductions to people you know in other regions and introduce to our JNF professionals, those whom you might not feel comfortable soliciting.

If you have not already done so, please register for the National Conference and Campaign Planning Summit in Washington DC taking place Friday, September 13th to Monday the 16th.  As leaders of this organization, we urge you to join us for what is sure to be an incredibly significant, meaningful, important, and FUN time with like-minded individuals all sharing a love of our homeland.  Also, an open meeting of the Board of Trustees will take place as part of the Campaign Summit on Monday the 16th.

We are excited to announce the launch of Be Inscribed, the JNF project to write Torah scrolls on Masada. As part of JNF’s product line, everyone has the opportunity to inscribe a letter, word, verse and so on - even the entire Torah.  Click on this link to see a great promotional video and to learn more.  https://beinscribed.org/

Click here to see last week’s Lay Leader Training Seminar featuring JNF CEO Russell Robinson and Chair of the Israel Relations Committee, Ken Segel, who provided an update on JNF Projects and Partnerships. Please save the date for the next Lay Leader Training Seminar on September 25 at 12 noon eastern featuring Vivian Grossman and Jodi Bodner, who will be speaking about JNF Marketing Tools and Social Media. Below are the recordings of the previous training seminars.

We Need Your Feedback!

We need your feedback! We recently sent out approximately 300K surveys to current and past tree and EZ Tree buyers. If you received a survey, please take a moment to fill it out. We need your help in making sure your leadership is aware of the survey and its importance, and encourage their participation.  If you believe you did not receive the survey but have planted trees with JNF, please check your spam, or email jmilstein@jnf.org for more information.

Capture your forever young hearts and minds on a carefully-paced, life-changing 10-day excursion next May. Learn more about the Sunshine Tour here.

Summer is here in full force in Gush Etzion! The temperature is warm, the kids are out of school, and many Israelis from all over the country and tourists from abroad are arriving by the thousands to take advantage of all the special events. So far, we have hosted our annual cherry festival, the Tekoa beer festival and rock concert, and we're just getting started.

Our friends Andy Bronsnick, Saul and Allyssa Rabinowitz Sutton, and the Wolf family from New Jersey have visited. The group toured the area and received a briefing on how Jewish National Fund plays a crucial role in providing our emergency first responders with essential equipment to fight fires in Gush Etzion - many of which were set deliberately in arson attacks. Since the beginning of 2019, Gush Etzion has suffered 421 attacks and unfortunately, they are ongoing.

Israel Leads the Way for those with Special Needs

Jewish National Fund and affiliate Special in Uniform travelled to Chesterfield, Virginia this week for a kick off event marking the start of a collaborative relationship with Growth Through Opportunity Cadets. Seven adults with special needs started a 16-week cadet academy, where they will be trained alongside members of the police and fire departments. We applaud Israel and Special in Uniform for leading the way and modeling inclusivity for other nations. 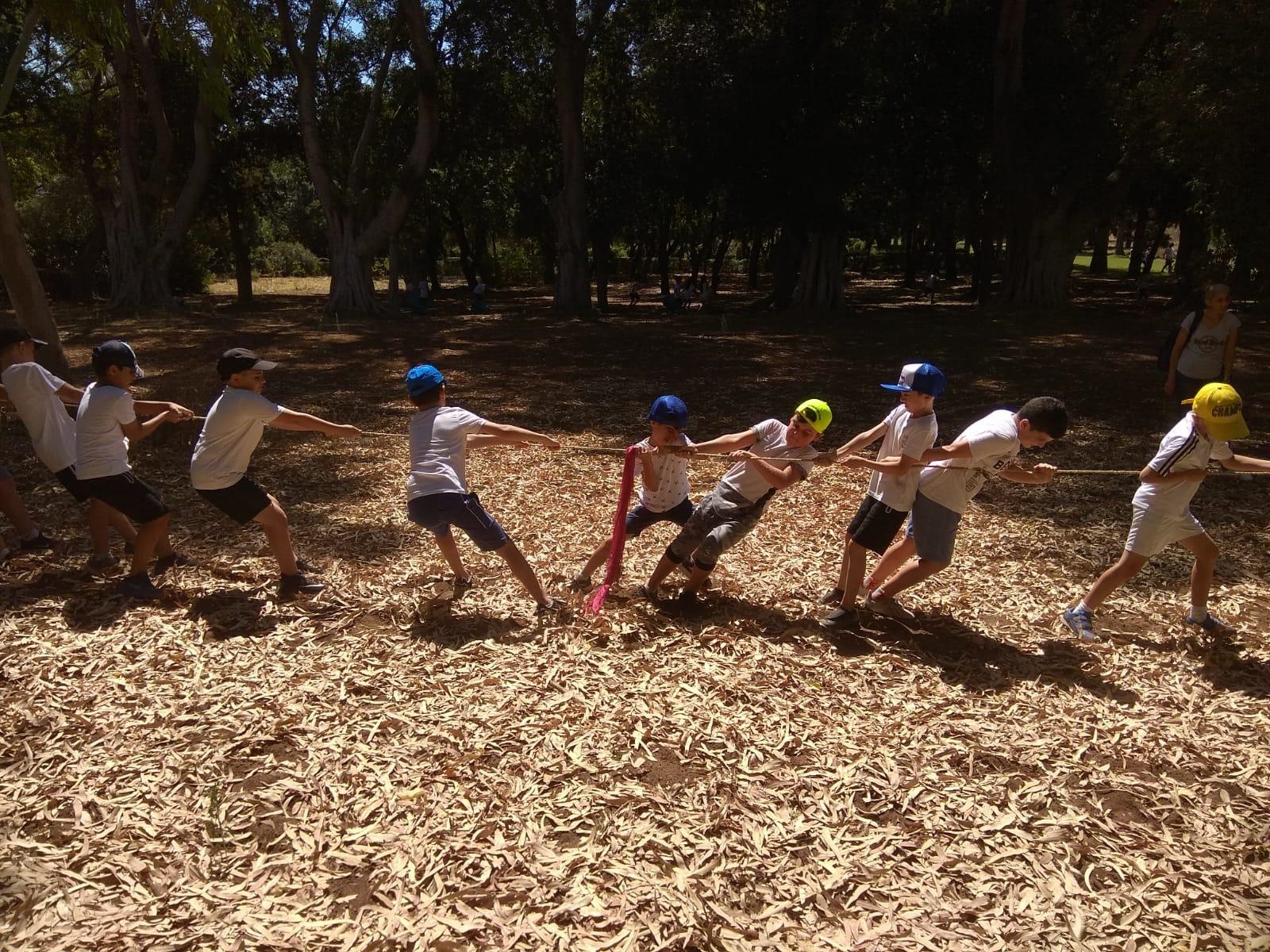 Summer fun is underway at the Mikveh Israel heritage site, Israel’s first agricultural school! The heritage site, located in Holon just south of Tel Aviv, has been holding summer camp sessions for local children. First, the kids get to take part in a variety of activities including games such as tug-of-war and thinking challenges in the beautiful botanic gardens. Then participants learn about the history of the school and even get to dress up like the original students at the agricultural school while learning about how the school revolutionized Israeli agriculture. These camps are a great way for Israeli school children to learn about Israeli heritage and have tons of fun along the way!

This week, Jewish National Fund affiliates ALEH Negev-Nahalat Eran and Green Horizons worked together to put a water collection device at ALEH Negev. Residents will learn about water preservation through this amazing program. Thanks to Dick Berman for bringing this great idea to fruition.

Douglas MacArthur, who was Chief of Staff of the United States Army said once:

"A true leader has the confidence to stand alone, the courage to make tough decisions, and the compassion to listen to the needs of others. He does not set out to be a leader, but becomes one by the equality of his actions and the integrity of his intent."

In this week’s Torah portion, Parshat Pinchas, we witness the ordination of Joshua bin Nun as the successor to our first national leader, Moses. Like Moses himself, Joshua never wanted to be a leader. Each, instead, wanted from an early age to serve. Moses: by going out into the fields where the Jews were working as slaves, and seeking ways to ease their suffering. Joshua: by devoting himself to Moses. Even as a young man, he was constantly present in the tent that served as a Torah study hall. As an adult, he remained Moses’s loyal student and aide. Both had to be persuaded to accept the role of leader.

Yet the deepest insights into what makes a real leader are revealed only when the responsibilities are about to change hands from Moses to Joshua.

Having just been told by G-d that he is about to pass away, it would have been logical and human for Moses to turn his attention to settling his own affairs and giving last instructions to his family and followers. After all, what leader isn’t concerned with what his mark will be on history? What parent isn’t concerned with how well their wishes will be followed after they pass on?

Moses wasn’t. He was concerned only about two things—that G-d’s will be realized, and that the Jewish people not be left alone without someone to understand them, protect them, inspire them and, when need be, comfort them. The words of his plea have forever encapsulated the meaning of what it means to be a Jewish leader: “G-d of the spirits of all flesh, appoint a man over the assembly, who shall go out before them and come in before them, who shall take them out and who shall bring them in.” (Numbers 27:15–17)

Why is G-d being addressed at this point as “G-d of the spirits of all flesh”? According to our sages, Moses is acknowledging a basic truth—that the personality of each individual is unique and known to G-d—and he is beseeching G-d to appoint a leader who can deal with each of these personalities. He is seeking a leader for the Jewish people who will be able to understand and empathize with each person. G-d answers him by promising that the man He is appointing as Moses’ successor is indeed one “in whom there is spirit,” i.e., that he will be able to act in a way befitting the personality of each individual.

Joshua was just such a person. He established a rapport with each individual based on genuine empathy, and not on attempts to curry favor. And true to the second part of Moses’ request, he “went before them and came in before them.” In other words, he didn’t send the nation out to war to fight battles. He went first, and he inspired in them the confidence to be successful and thus come back (“and come in before them”). For centuries, these were the defining characteristics of the army of the Jewish people. Unlike other armies, where generals stay comfortably behind the line of fire, the generals of the Jewish army always went first, and with their good deeds, empathy, and trust, were able to inspire confidence in their soldiers. Victory was the result.

Of course, this was true not only of physical battles, but of our internal spiritual battles as well. Each of us has to find the inspiration in Moses’ words to become true leaders in our own sphere of influence. By caring about and genuinely connecting to the souls of people we must influence—for starters, our families—and by relating to their individual personalities. By leading through example, even if it means stretching ourselves to the breaking point; and by strengthening our own trust in the One who is guiding us, whether we see His hand in things or not.

It’s a kind of leadership that tends to create not followers, but people who are genuine leaders in their own right. And that’s something this world could use a little more of.

Looking at the leadership here at JNF it is evident that they possess these qualities. They are here to serve the land and people of Israel. Our leadership encourages leadership. They inspire donors to not only financially support JNF, but also give their time and expertise and become leaders of JNF in their own right.