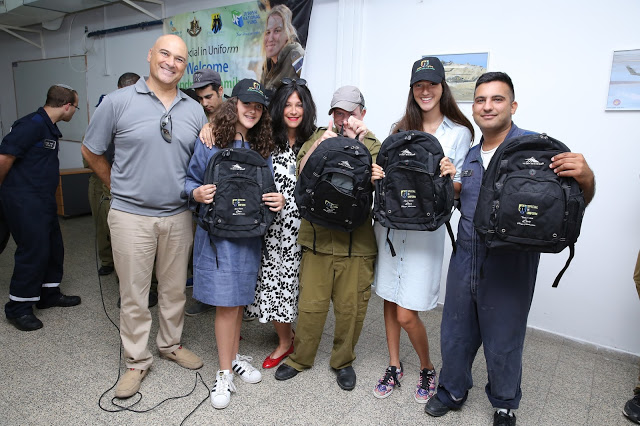 Today we bring you a story of a generous bat mitzvah celebrant who helped raise money for Special in Uniform in honor of her milestone birthday. Special in Uniform is a partner in JNF's efforts to ensure no member of Israeli society is left behind, as part of the Task Force on Disabilities.

At a special ceremony at an Israel Defense Forces base in Israel, 12-year-old bat mitzvah girl Tanya Andrusier of Bal Harbour, Florida, gave 250 backpacks to soldiers with disabilities. Tanya was inspired by the soldiers of Special in Uniform and decided to do something special for them in honor of her bat mitzvah by using her talent as an artist.

Special in Uniform is an innovative program that aims to integrate young people with disabilities into the IDF. The program goes beyond the walls of IDF bases, helping its graduates integrate into the workforce and Israeli society in meaningful ways.

Tanya’s connection with the organization started back in May, when her family hosted a special reception for the Miami community where the director of Special in Uniform, Lt. Col. (res.) Tiran Attia, spoke about the program and Jewish National Fund’s work for people with special needs. It was after this event that Tanya decided to make Special in Uniform her bat mitzvah project. To raise awareness and funds for the organization, Tanya began selling paintings she created. Her artwork and dedication to Special in Uniform inspired those in her community.
“She sold over 120 of her canvases and we were able to raise enough money to bring joy to the soldiers.” said Devorah Leah Andrusier, Tanya’s mother.
Added Tanya’s grandmother, Chani Lipskar, "For weeks she sat and painted magnificent pieces of art. They had an art exhibit in their home for family and friends in the community. Everyone was so proud to be part of Tanya’s project. They bought her art and displayed them proudly in their homes. It was an honor knowing that the money that was raised was going to help very special IDF soldiers."

All of the money she raised went directly to purchasing backpacks for the soldiers of Special in Uniform.

Tanya’s parents, grandparents, brothers, sisters, family, and friends joined her on a special trip to Israel where she was able to visit an IDF base to meet the soldiers of Special in Uniform and give them the backpacks in person.

At the base, Tanya told the soldiers "I learn so much from you, you taught me to be happy and to appreciate what I have."

Tanya’s grandfather, Rabbi Sholom Lipskar, the spiritual leader and founder of The Shul of Bal Harbour, told the soldiers: "Thank you for everything you do for us and for every Jewish person in the world. We are very proud to be here and to support you."

“We all are so inspired by Tanya and her incredible project which gives encouragement and hope to those young men and women with disabilities, and strengthens the relationship between the USA’s Jewish community and Israel.” said Lt. Col. (res.) Attia.


Check out this video from the event!