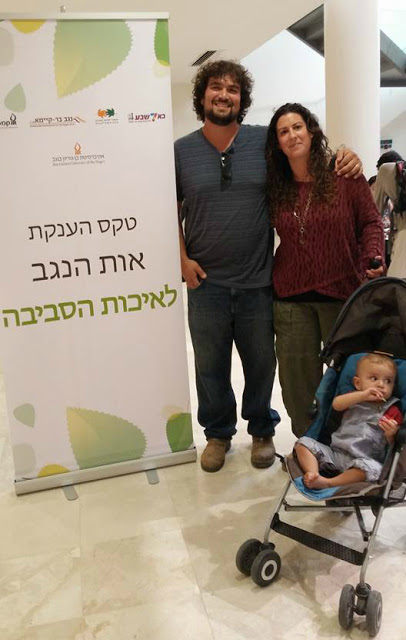 In keeping with Jewish National Fund's Blueprint Negev initiative, which aims to revitalize Israel’s southern region, the country’s environmental ministry last week awarded its prestigious Environmental Prize of the Negev to Earth’s Promise. Earth’s Promise, a JNF partner, is an organization that promotes environmental sustainability and urban agriculture in Be'er Sheva and other Israeli cities.
Be'er Sheva, once a sleepy, dusty desert town, today is a sprawling, bustling city that is often referred to as the "capital of the Negev." It is the seventh most populous city in Israel, and in recent years, has become home to a large influx of Ethiopian immigrants. It is for them that Earth’s Promise was started in 2007.
"The idea behind it was to help make our city green, but to do it in a community fashion,” said Ethelea Katzenell, an Earth's Promise founding board member, who recounted how a committee was formed to work with the Kalisher Absorption Center, where many Ethiopians lived. "Since their background was mostly agrarian, we thought we could help them to literally sink new roots into their new country by starting a community garden with them," she said.

Moran Slakmon is co-director of Earth’s Promise with her husband, Adam Ganson.

"These are people who came here with no jobs, no Hebrew, and with traditional [agrarian] knowledge that, living in an urban environment, they couldn't pass on to their children," she said. "Now they can pass it on and it's meaningful. Also, the residents of the neighborhood where the absorption center is located appreciate the garden and many have asked for furrows of their own, which is a source of pride for the Ethiopians."

Other projects include working with at-risk children in an after-school program by providing them with gardening education, providing gardening education to high school students in Bedouin communities, and hosting farm-to-table events to raise awareness about local food. Recently, for example, volunteers harvested nearly a ton of olives from a small local grove and made olive oil to sell.
The garden, attached to the absorption center, began with 10 furrows (trenches used to plant seeds) -- one per family -- then grew to 50, and eventually to 100, with more now being planned. "They can plant whatever they want, including fruits and vegetables they had in Ethiopia that they miss in Israel," Katzenell said. "It’s wonderful to see families working together, using their skills, feeling proud of themselves. And when they leave the absorption center for new homes, they bequeath their furrows to new families coming in."
The community-garden model that Earth's Promise set up -- urban farming attached to an institution -- has been replicated in several locations in Be'er Sheva, as well as in nearby Bedouin communities and the Negev cities of Ashkelon and Arad. Today, these communal plots can be found not only at absorption centers, but at community centers, schools, and old-age homes. And now, they have served to bring Earth's Promise to the next stage in the organization’s development.
"Two years ago, we started what has become our flagship project," Ganson said. He and Moran took over executive duties in 2012, and a year later established an urban farm on land adjacent to the Kalisher garden. The first of its kind in Israel, it is a commercial farm within city limits where organic produce is professionally grown. Its produce and products are marketed to local restaurants and are for sale to local consumers.
"The urban farm is a self-sustaining project that brings in tourist groups, sells produce and products on a regular basis, and provides job opportunities to residents of the neighborhood," Ganson said. "Our emphasis is on local food, how it strengthens the community in which the farm is located, and how it supports the local sustainable economy."
Winning the environmental prize, Ganson said, indicates that "we're heading in the right direction, that our projects and activities are valued. For me, this is a stepping stone to finding a real sustainable model for southern cities in Israel."