(CNN) -- Driven by desperation, Marina and Lev Furman stepped out of their home in Leningrad and took a 20-minute walk into uncertainty. Trailed by KGB agents, they bundled up and set out in the weak winter light for Palace Square, site of the 1917 Bolshevik Revolution.
They brought signs demanding freedom. And they pushed a baby carriage holding their 9-month-old daughter, Aliyah, who had already proved in her short life that she, too, could handle risks.
Friends told the Furmans they were crazy. Such demonstrations were forbidden in the square. The couple arrived in silent protest and spotted a mob of police and KGB agents waiting for them. Knowing they'd be taken away, they chained themselves to Aliyah's carriage.
For years, they'd asked for permission to leave. Each time, their requests were denied. Told once more they'd never be allowed to go, they were taking a final, calculated, bold stand.
On this day, though, they knew they weren't alone. The date was December 6, 1987.
Some 4,500 miles and a world away, 250,000 people were preparing to protest in Washington as Soviet leader Mikhail Gorbachev was preparing for his first White House summit with U.S. President Ronald Reagan. The demonstrators wanted to make sure the Furmans and other Soviet Jews weren't forgotten. 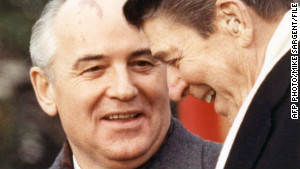 Soviet leader Mikhail Gorbachev arrives for his first U.S. summit with President Ronald Reagan.
Known as Freedom Sunday, the rally would be the culmination of a decades-long populist campaign the likes of which the world rarely sees. Americans of all stripes were coming together to demand human rights in a faraway land.
Driven by students and housewives and fueled by post-Holocaust guilt, civil rights activism and a newfound sense of Jewish pride after Israel's 1967 Six-Day War victory, the movement brought together Jews and non-Jews, religious and secular.
It's a part of a recent past that's nearly forgotten but that once enjoyed the support of top-tier politicians, congressional wives, Catholic nuns, actors, musicians and civil rights icons, includingMartin Luther King Jr.
If a new coalition has its way, the Soviet Jewry movement will find its place in history books and serve as a model for change in a time when global human rights abuses continue.
"It created a unity that today seems impossible," said Gal Beckerman, a journalist whose 2010 book about the campaign won widespread praise. "For Jews, this was the movement that allowed them to bridge their American and Jewish identities. ... They were flexing their political muscle for the first time."
Their mission was to keep human rights issues on the table for as long as it took, even as diplomats and politicians negotiated nuclear disarmament and trade agreements. In the end, this relentless push would play a part in ending the Cold War, bringing down the Soviet Union and ultimately freeing more than 1.5 million Jews -- many of whom watched from afar as the Jewish state of Israel grew, even while their own religion and identity was suppressed under Communist rule.
Learn what led to the oppression of Jews
Among those working behind the scenes was Reagan's secretary of state, George Shultz.
Part of the administration's agenda, when it came to negotiations, was human rights, said Shultz, now 92 and a distinguished fellow at Stanford University's Hoover Institution.
"We developed a way to put it that I wrote out and read very slowly," he said, describing talks with his Soviet counterpart. "The gist was ... any society closed and compartmented will fall behind. So you've got to loosen up if you're going to be with it. And part of it is respecting the diversity and views of your population."
Shultz also met with "refuseniks," the term used for anyone who'd been refused exit visas. He attended a Passover seder with them at the U.S. Embassy in Moscow. And he unofficially slipped a list of refusenik names to his Soviet counterpart, asking for their release.
While Shultz said it would have been inappropriate for him to attend the rally in Washington -- then-Vice President George H.W. Bush was among the speakers -- he loved the idea of Gorbachev turning on his TV to see the crowd on the National Mall. The event helped mark the beginning of the end. The gates were poised to open.
"It had a very positive impact," Shultz said.
Join the March - Freedom 25 was established to assure that the critical lessons of the Soviet Jewry movement are learned by future generations, so they can again be applied to expand the reach of freedom.
PLANT TREES IN ISRAEL