At JNF conference, student has a powerful revelation about Judaism 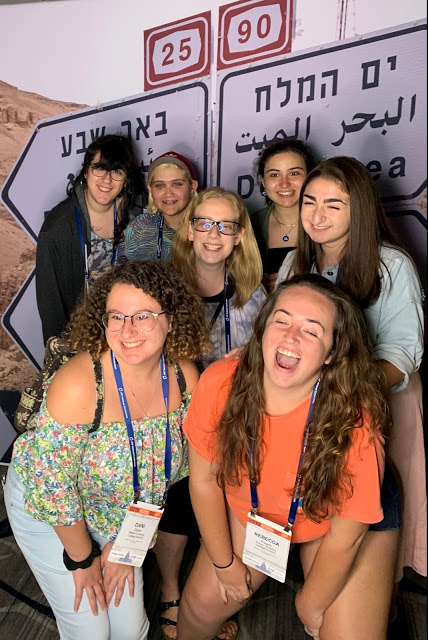 In many ways, Judaism has a moral compass built in. After attending Hebrew school for six years, and five subsequent years assisting as a madricha, or youth leader, I've realized there's a common theme that permeates my religion: Judaism is about giving.

Growing up, our Hebrew school classes began with a tzedakah box. I remember it very clearly as being blue and green and featuring the state of Israel prominently on the front. As students, we'd often shake it, trying to see how much was inside by listening to the clang of the money against its tin walls.

Every week, we were instructed to bring in a few coins or dollar bills to slip through the slit of the box, and later, we'd sing a song to explain why we weren't saving the cash for ourselves: "Tzedakah, tzedakah, we do what we can / To help other people and our fellow man / With quarters and nickels and dimes -- pennies too! / Tzedakah, tzedakah it's the best we can do."

Of course, as a kid, I didn’t exactly grasp the concept. Why would we donate the little money that our parents gave us? What was the point of keeping it in that tin can? Where did we even get that tin can? Two weekends ago, I finally learned about the origins of the tzedakah box.

On Friday, Sept. 13, my Hillel delegation from Stetson University in Florida left for the Jewish National Fund conference in Washington D.C. There, we not only attended sessions led by prominent Jews in their fields, but connected with other Jewish college students from around the country. I reconnect with someone I met the year prior from Ohio State and listened to New York Times opinion writer Matti Friedman speak with verve about how the framing of journalistic stories 100 percent affects the way we view certain events, specifically the conflict between Israelis and Palestinians.


My greatest revelation at the conference occurred Sunday. At one of the opening plenaries, a speaker revealed that JNF was the source of the tzedakah boxes. As someone who has referred to herself as Jew-ish, feeling connected culturally, but not always in a religious sense, I was surprised by this, and specifically that it seemed there was a reason the song we sang at Hebrew school has stuck with me for so many years. I can still recite it without hesitation, even though I haven’t heard the sond since I was 17, and that made me realize it's not just Judaism that's about giving. JNF is too.

I figured out that subconsciously, it was JNF that led to me to go on Project Tikvah, a community service trip I took to Charleston in 2016 to volunteer at food banks and help provide assistance to people whose homes were ruined in a mass flooding the year prior. And although I've never been very religious, it's the Jewish values I've acquired and experiences like Project Tikvah that inspire me to do better. I truly believe in the power of the messages that tikkun olam and tzedakah promote, and even if I do not pursue a career that directly ties into Judaism, I want to impact people's lives like JNF was able to impact mine.
PLANT TREES IN ISRAEL