Alexander Muss High School in Israel (AMHSI) is a program built on exploration and discovery. Students are inspired to live outside their books and encounter new ideas. On October 10, a group of 16- and 17-year-olds encountered authentic Israeli culture at a concert, although it was performed by an American artist. Matisyahu rocked Jerusalem that evening, but for the nearly two dozen AMHSI students, he rocked their hearts.

Matisyahu is an alum of the AMHSI program, a fact the students learned about days before the concert. For them, that connection made the artist's music more meaningful.

"This feels very cool. It's like I'm a part of something bigger," said Solomon Friedman, 16, speaking about his excitement at hearing Matisyahu in Jerusalem. "It really shows me that this path I am on, the path of learning at AMHSI, is one that can lead to success. It is very exciting and inspiring."

"I know Matisyahu's music," said Nathan Pitock, 17. "But I don’t know it that well. And it's something else to hear it in Israel, where Matisyahu got his start."

Similarly, Alli Einhorn, 16, said she would look at Matisyahu's music differently now, knowing he likely experienced some of the same spiritual awakening she has. He talks about in his music and during interviews while walking in the same steps that she has been walking in for the past six weeks.

AMHSI offers eight-week, 12-week and 18-week academic year and six-week summer programs for high school students. Generously supported by Jewish National Fund, the school has revolutionized experiential education, and in particular, the way history is taught and the way Israel is experienced. It provides a historically chronological exploration of the land through the study of historic events, places, and people.

"I am literally living the history of Israel," said Simon Gordon, 16, who also attended the concert. "It is the history, the knowledge of the country and the memories I am creating. My love for Israel just keeps growing since I arrived."

At the concert, Matisyahu closed with his famous song "One Day": 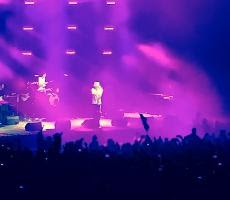 "All my life I've been waiting for, I've been praying for;
For the people to say, that we don't want to fight no more;There will be no more wars, and our children will play."

The song, amidst the recent escalation of terrorist attacks in Israel struck a chord with attendees. This intense emotion became stronger as the clock struck midnight, and families from One Family, an organization that helps support victims of terror, joined the artist on the stage.

For the teens of AMHSI, witnessing this scene and understanding the deep connection the artist, who no longer lives in Israel, continues to have with the people and land of Israel, as well as his Jewish religion, was "dramatic," according to Simon.

The concert was colorful and festive, with bright, sometimes blinding, lights of purple, blues and greens. Attendees waved Israeli flags and chanted the Israeli national anthem, “Hatikvah.” The AMHSI attendees were all smiles as they joined the masses, hugging one another, connecting, singing, and celebrating.

"I am growing as a person," said Alex Woods, 17. "Before I came to Israel, I didn’t feel the need to pray every week, but I do now. Here the Jewish religion feels warmer, more intimate, and I know I will want to continue when I get back to the States."

Micah Weitzman, 16, added: "AMHSI for me is timeless. In just six weeks [the students are mid-way through a 12-week program] it has impacted my life in such a positive way. The memories of the things to which I have been exposed, including hearing Matisyahu play by the walls of the Old City, are memories that will never go away."
PLANT TREES IN ISRAEL